The second issue of The Confessional Presbyterian began a growing trend toward fatter issues. It is 256 pages (approx. 276, 112 words). The most significant material here if I may express an opinion is the first part of the series on sixty years of literature on the subject of the Regulative Principle of Worship. Also with issue 2 we began a trend of running, in what I think is the most overlooked feature of the journal, first time translations of interesting if not important texts on a variety of subjects. This issue ran a translation from a work by the student of Samuel Rutherford, John Brown of Wamphray, Libri duo: in priori, Wolzogium, in libellis duobus de interprete Scripturarum, causam orthodoxam prodidisse demonstratur. In posteriori, Lamberti Velthusii sententia libertino-Erastiana, in libello vernaculo de idololatria & superstitione naper proposita, detegitur & confutatur (Amstelodami, 1670), on the subject of the universal visible church. This issue remains in print.

To purchase this and other volumes see the online store.

3.      Baptism and the Benefits of Christ: The Double Mode of Communion in the Covenant of Grace. By R. Scott Clark, D.Phil.

20.      Severing the Dragon’s Tail: The Rejection of the Mass and the Adoption of the Reformed Practice of the Lord’s Supper during the Scottish Reformation. By T. J. Phillips

28.      Presbyterian Due Process: A Scottish and American Recovery of Procedural Canons. By Stuart R. Jones

43.      Liberty of Conscience in the Westminster Confession and its Application to Modern “Worship Wars.” By John (Jack) Allen Delivuk, Th.D.

71.      Francis Makemie and the Meaning of American Presbyterianism. By D. G. Hart, Ph.D.

79.      Critical-Realism & the Relation of Redemptive Act to Revelatory Word. By James J. Cassidy

208.      In Translatiōne: John Brown of Wamphray: The Universal Visible Church

211.      Antiquary: T. & J. Swords. Part One. Printers During the Federal Period to Doctors, Scientists, Friendly and Calliopean Clubers, and other New York Literati, as well as High Churchists, and the Occasional Presbyterian. 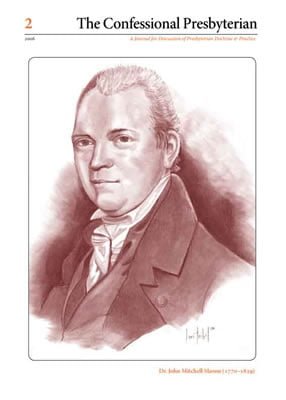 Your shopping cart is empty.

Do NOT follow this link or you will be banned from the site!