The inaugural issue of The Confessional Presbyterian Journal in 2005 was a bit more modest in size than some of the later issues. It was 184 (approx. 209,520 words). This issue is out of print. While it is more modest in size and perhaps more significant material appeared later, because this issue proved out all the design work that went into creating the journal, it remains a personal favorite. The “Reframing Presbyterian Worship” by Frank J. Smith and David C. Lachman is an important piece and it has been put online. http://tinyurl.com/mc79o46 To purchase other volumes see the online store

43.      Examining the Work of S. W. Carruthers: Justifying a Critical Approach to the Text of the Westminster Standards & Correcting the 18th Century Lineage of the Traditional Scottish Text. By Chris Coldwell

94.      The “Ministerial and Declarative” Powers of the Church and In Thesi Deliverances. By C. N. Willborn, Ph.D.

168.      Antiquary: The Traditional Form of The Westminster Standards. 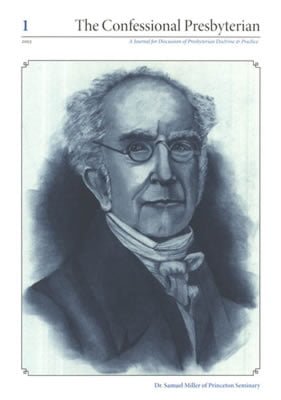